458 socom ammo for sale at DISCOUNTAMMUNITIONSTORE 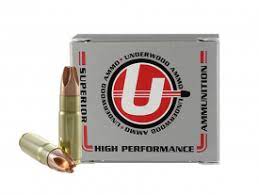 While taking advantage of state of the art testing equipment, this high performance ammunition by Underwood is field tested using popular, real firearms that customers are most likely to own out in the real world with all the elements you would experience. If for some reason Underwood Ammunition fails to meet performance expectations, Underwood stands by their product 100% and will make sure the customer is satisfied with every purchase. This ammunition is new production, non-corrosive, in boxer primed, reloadable brass cases.

The Lehigh Xtreme Penetrator bullet features progressive nose geometry, which allows for deep, straight penetration while creating a permanent wound cavity diameter exceeding that of most expanding bullets. To top it off, the bullet is solid copper and is able to overcome barriers to penetration; environmentally friendly, target unfriendly, very unfriendly, downright obnoxiously unfriendly. The magic happens with the nose design where the radial flutes force the hydraulic energy inward and then as the energy is restricted, it accelerates outward creating high pressure spikes damaging surrounding tissue. Kind of similar to sticking your thumb over a garden hose. The permanent wound cavity of the XP is from two to four times greater than what a flat or ball nose bullet generates and often larger than traditional expanding bullets. So what you get is exceptional penetration coupled with a larger permanent wound cavity. The solid copper alloy construction will not deform when contacting hard surfaces like a lead jacketed bullet will do nor will it fragment as some hard cast lead bullets are prone to do. What it will do is overcome surface barriers and penetrate straight and deep while creating a massive wound channel.

Suppressor Safe— The projectile is machined from solid bar stock. This is not a frangible bullet produced from powdered metal.

Be the first to review “458 socom ammo” Cancel reply