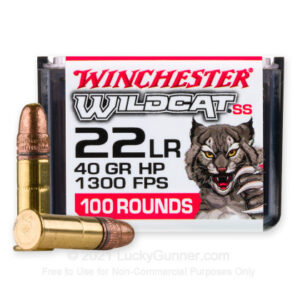 Since 1971, Winchester Wildcat has elusively stalked the woods in search of small game. Ready to strike fast and hit hard, these rimfire cartridges are ready for hunting and plinking.

From what we’ve seen, about one-third of high school sports teams are named “Wildcats.” This isn’t nearly enough, but fortunately Winchester is picking up the slack by naming a whole line of 22 LR ammo “Wildcat” as well.

Like the animal it is named after, this little rimfire round is vicious. Its 40 grain bullet is poised to exit the muzzle at 1,300 fps – over 150 fps faster than the speed of sound – so it’s due to remain supersonic until it reaches 60 yards. At 100 yards the bullet retains nearly 100 ft lbs of energy, which is still enough to strike any varmint off of the map.

This round’s copper plated hollow point bullet suits it even better for hunting. Its non-ferrous coating helps the CPHP to avert rapid barrel fouling and preserve accuracy, and its narrow nose cavity triggers positive expansion inside game. CPHP bullets are fine and dandy for target practice, too!

Winchester expressly designed this ammo for semi-automatic use, so expect it to fully cycle any magazine-fed pistol or rifle.

Winchester Wildcat ammunition is an affordable yet high performing load that delivers excellent accuracy and consistency. The lubricated bullet ensures sure functioning and reliability. Perfect for high volume target shooters and plinkers.

This 22 LR cartridge from Winchester’s Wildcat ammunition line not only boasts the kind of terminal performance that’ll make you the deadliest thing in the woods to little varmints, but is priced affordably enough to let you fire all day without a care for your ammo budget. It’s precisely the sort of round any rimfire enthusiast should be happy to have 500 of in store!

This round features Winchester’s versatile DynaPoint projectile. At 40 grains it handles just as most shooters are accustomed to, and with its thin sheathe of copper it works rather like an FMJ to prevent the rapid leading of the bore that harms a weapon’s accuracy. The DynaPoint further features a hollow point nose cavity, enabling it to quickly widen as it thrusts through a pest critter’s body in order to kill it fast and humanely.

This round’s non-corrosive rimfire primer and corrosion resistant brass casing both suit it splendidly for long term storage. You won’t have to scratch your head wondering which 500 things you’ll need to shoot right away!